In this article I will briefly introduce the background about the Chinese zodiac system, and the last zodiac sign – Pig.

In the pre-Qin period (Palaeolithic period — 221 BC), China had a relatively complete zodiac system. The earliest record of the modern 12 zodiac signs is the literature named ‘On Balance’ written by Wang Chong in Eastern Han Dynasty (AD 25 – AD 220).

Pig is one of six domestic animals. Pork is also one of the main meat consumptions in China. The average Chinese person consumes nearly 40 kilograms of pork each year (source: China industry information network statistics/pork 2018), representing approximately 49% of global pork consumption. As a large agricultural country, pigs are closely related to hundreds of millions of Chinese farmers’ lives. When people select 12 animals as their zodiac sign, they will naturally use the animal that is closest to their life. So, it is a logical thing for pigs to become one of the Chinese zodiac signs. 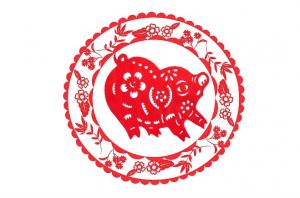 There’s a lot of folklore about how pig became one of the zodiac signs.

One folklore tells of the pig’s efforts to win the nomination of becoming one of the Chinese Zodiacs. On the selection day of the celestial zodiac, the Jade Emperor from the Heaven decreed that it was necessary to arrive at the heavenly palace at a certain time. The pig knew that he walks slowly due to his heavy body weight, so he got up in the middle of the night to get in line. Due to the long distance and many obstacles, the pig managed to climb to the South Heavenly Gate, but the time of the Chinese zodiacs’ selection had passed. The pig begged, and the other five animals also begged for letting the pig in, finally the Jade Emperor of the Heaven was touched and let the pig into the South Heavenly Gate as the last one of the zodiac signs. This way, the six domestic animals such as horses, ox, sheep, chickens, dogs, pigs have joined the other 6 (Rat, Tiger, Rabbit, Dragon, Snake, Monkey) to become the Chinese zodiac signs.

Chinese farmers believe that between 9 and 11 PM (also known as “hai shi” – Chinese time counting system), pigs sleep the deepest and snore the loudest; and a pig’s muscles quiver the most strongly. This time period is the fastest flesh growing time frame for pigs. Therefore ‘Hai shi’ (21.00-23.00) has a nickname in China as ‘piggy time’.

A pig’s fat head and big ears are a symbol of good fortune and a sign of wealth.
We wish you a lucky and fortunate 2019! Have a lot of fun and enjoy friendship, adventure and be appreciated for your big heart. 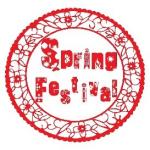 Schrijf u in voor onze nieuwsbrief

This website uses cookies to improve your experience while you navigate through the website. Out of these, the cookies that are categorized as necessary are stored on your browser as they are essential for the working of basic functionalities of the website. We also use third-party cookies that help us analyze and understand how you use this website. These cookies will be stored in your browser only with your consent. You also have the option to opt-out of these cookies. But opting out of some of these cookies may affect your browsing experience.
Necessary Altijd ingeschakeld
Necessary cookies are absolutely essential for the website to function properly. This category only includes cookies that ensures basic functionalities and security features of the website. These cookies do not store any personal information.
Non-necessary
Any cookies that may not be particularly necessary for the website to function and is used specifically to collect user personal data via analytics, ads, other embedded contents are termed as non-necessary cookies. It is mandatory to procure user consent prior to running these cookies on your website.
OPSLAAN & ACCEPTEREN